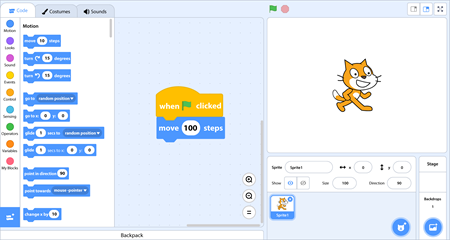 Thursday June 20 we will have a focus on programming in addition to our standard stations (3D printing, doodle pens, Maker Cart, …). Those of you who submitted 3D print jobs June 13 can pick them up on the 20th.

We will have a workshop on programming with Scratch, a graphical programming created by the Lifelong Kindergarten Group at the MIT Media Lab (I still love the name and the idea that you can get a PhD from this group!). Scratch provides a great entry path into programming, but is also capable of quite sophisticated work. The general block-programming format has been replicated by a lot of different groups.

For those of you new to Scratch, we will provide an introduction and several challenges to try out in Scratch. For those who have already spent some time with Scratch on their own or in school, we will have available Cue Robots (which can use a Scratch-like variant or javascript for programming) and Micro:bits, which are an Arduino like microcontroller which can naturally interface with Scratch 3. (Micro:bits can also be block programmed independently or programmed in MicroPython.)

We will have a some “communal” scratch accounts available for use, but if you’d like to save and share programs under your own space, you can head to scratch.mit.edu with your parents and create your own account.